In 1922 the Minister for Education, Mr Mutch, announced the calling of tenders for the building of the Central Newcastle School on the fifteen acre site acquired by the Department at Broadmeadow. There would be three main blocks of buildings, the central one to provide for ordinary class-work and science, one for domestic science and one for manual training work. 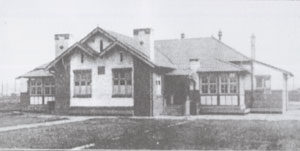 Industrial training was required to service the employment needs of the Broken Hill Proprietary Company that had commenced operations in 1915. In July 1923 Colonel A. Bennett became Head Master and Miss Zillah Bocking became Mistress of the girls’ section. Central School was set up to provide domestic, commercial and technical courses.

Soon after its commencement the school adopted brown and green, the colours of the 35th Battalion and at the same time the school motto was determined as “Man is the architect of his own destiny” or “Faber Est Suae Quisque Fortunae”.

“Newcastle Central School caters for those boys who aspire to apprenticeships or to some occupation of an industrial character. The course for girls aims at preparing them for the effective discharge of duties within the home. In the second year a course in domestic science or in business training is offered. A number of scholarships are awarded to second year girls undertaking the domestic science course to enable them to undertake a three years’ course at the Technical College. Applicants for positions as teachers of Cookery, Laundry and Needlework in the Department of Education must have qualified in this course.”

In 1924 Miss Dorothy Henson replaced Miss Bocking as headmistress, remaining in this role till 1947 and directing Central School through twenty four years of educational change and progress.
Girls and boys were separated during lessons but joined for social and sporting activities. The school magazine was a joint effort. There were mixed clubs in drama, musical items, gardening, philately and debating. Sporting activities were an important part of school life for the girls at Central with swimming, tennis, basketball, hockey and vigoro available. Many teams and individuals represented the school at inter-school sporting events. Physical culture was also a popular leisure activity for the girls.

The first Mothers’ Club formed in 1925 was the forerunner of the Ladies’ Auxiliary. The Mothers’ Club raised the money to furnish the girls’ cottage and to provide for other amenities for the school. Social evenings and concerts were organised and all proceeds went to the school. By 1927 a P & C Association was formed to carry on fund-raising efforts.

By 1931 numbers of 423 girls and 728 boys indicated that another school was urgently needed for the district. In December 1931 the new school in Dumaresq St, Hamilton South, was officially opened and was known as Newcastle Central Domestic Science School.

At the 15th Anniversary of the school in 1938 an Honour Board, made by the boys of the Central Technical School, was presented to the school at Hamilton South showing the fraternity that existed between the schools at that time. The names of the School Captains from 1923 to 1938 were inscribed on the board.