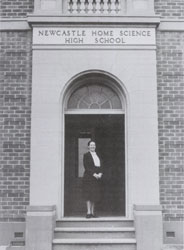 In 1944 Newcastle Home Science High School at last evolved from Newcastle Central Domestic Science School to become one of four selective high schools in Newcastle (2 girls and 2 boys). The term “Domestic Science” was not officially an accepted term from 1942 onward and several schools had similar name changes. After a decade of unrecognised status the name change to include “High” was greatly received.
Enrolment was selective from sixth class assessments together with intelligence tests.

Within weeks of the end of WW11 the air-raid shelters and sandbags were only a memory as all were removed and by 1953 the sporting fields were opened. While the curriculum enlarged during the change, English and Mathematics still stood as the heart of all years, while Home Science and Commercial subjects remained compulsory to the end of year three. It was during this period that the Science Department began its expansion. With only a small laboratory and demonstration room available for lessons and more students seeking these subjects, it was a wonderful relief to have a portable science room delivered in 1952.

After a long absence from the Leaving Certificate curriculum, Economics reappeared in 1944, while Geography first appeared in 1950. From 1945 until 1956 Geology was taught with classes held at Newcastle Girls’ High School (adjacent) and the Technical College, due to lack of Geology supplies and equipment at the school.

The end of 1947 saw the departure of Miss Dorothy Henson, the longest serving headmistress of this school, having served in this capacity at Newcastle Central Domestic since 1933 a total of 24 years; Miss Lillian Whitoak then took over the leadership in 1948 until 1951, then Miss Isabelle Campbell stayed for two years to be replaced by Miss Aileen Treglown.

The School could boast of a very strong and supportive P & C and Ladies Auxiliary providing equipment and services well above departmental standards to keep up with the modern technology of the time as well as extras, such as a piano and ceramics kiln. Inter-School Christian Fellowship, Radio Broadcasting (2KO), lunch concerts, drama (both as audience and participants) debating, excursions and sports were only some of the extras enjoyed by the students.

At the close of 1957 Newcastle Home Science High School evolved into Hunter Girls’ High School having lived a history of progressive teaching.