In 1958 the school acquired a new name and the Headmistress, Miss Aileen Treglown, declared that the new name was “a milestone on the road of progress towards education in the true sense. Women must play a vital part in our national life, in the home, socially, culturally and politically”. To that end the school offered all its students the opportunity to participate to their full potential in a wide range of educational experiences. In addition to gaining academic proficiency in Literature, Science, Mathematics, Art, and Domestic and Commercial subjects, the girls were able to participate in debating, public speaking, drama, musicals and opera and many forms of sporting activities.

Miss Treglown introduced a new sports uniform consisting of brown tunic (no pleats) with V-neck, brown bloomer pants made of the same material and tasselled belt coloured in house colours. The length of the tunic was strictly enforced by kneeling on the floor and measuring no shorter than 6 inches from the floor. The serge tunic (three pleats front and back) remained the main school uniform all year round along with the navy blue felt hat.

In 1963 some of the school’s activities included a visit to the coalfields at Cessnock, a visit to Vaucluse House, Parliament House and AMP Building in Sydney and a Tasmanian tour. The school also hosted various entertainment groups such as the Elizabethan Players and students from the Newcastle Conservatorium.

The long-awaited assembly hall, erected in 1960, was finished in time for the 1960 Leaving Certificate candidates to use for the exam.

During the 1960s and 1970s the school’s strong musical tradition continued to inspire the heartfelt singing of the school song and the Lord’s Prayer at assemblies. 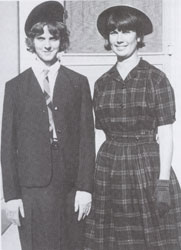 he Wyndham revolution changed the format of the education system and favoured a comprehensive and co-educational system. In 1962 the Wyndham Scheme was introduced in First Year of High School and a year was added to secondary education. The last Leaving Certificate was conducted in 1966.
At the beginning of 1966 the Principal, Mrs Mabel Whiley, was pleased to be able to occupy the new school building and to introduce new summer and winter uniforms, consisting of skirt, blouse, tie, jacket and beret. The new building comprised the much-needed science laboratories, library and library annex, and more classrooms.

In 1967 Miss Marjory Loveday became the school’s principal and led the school through an unsettling period in which Newcastle schools were marked for change, until she retired at the end of 1972. She was remembered for “the deep personal interest” that she had taken in her students. It was during 1972, on the 30th May, that the school began its 40th Anniversary Celebrations. In the 1972 School Magazine Mrs P. Toms, the deputy principal, expressed a wish that “whatever the future holds for Hunter,…we shall continue to build on the best traditions of the past forty years”.

In 1973 the Director of Education, Mr E. Gray, announced that Hunter Girls’ High School and Newcastle Girls’ High School would be amalgamated. Mrs Dora Ewers, an ex-student of the school and 1937 school captain, became the principal during the difficult years before amalgamation. The school carried on as normal but behind the scenes preparations were being made for the amalgamation. Dora expressed her sadness “that Hunter is becoming part of the history of Newcastle”.